A Chicken bus is a North American school bus. When they are no longer in use, they are sent to Central America and they used them as their public transportation system. They are referred as chicken buses as they are often jammed packed and sometimes people will carry live animals. There is the driver and a cobrador (collects the fare).

No trip to Central America is complete without a bus ride. So I’m in the direct bus going towards Chalatenango. Place of birth of my grandfather. My mother has asked me to inquire about our family. My main goal is to get to the mountains where I’ve booked 4 nights in a resort. This is a good bus which means air conditioning is included in the $2.50 fare. I tell the cobrador that I’m going to Entrepinos Resort, he tells me he’ll let me know when to get off. I don’t have the faintest idea where I’m going so I just enjoy the bus ride. We arrived in the city of Chalatenango, it’s midday and it’s hot. I was never told where to get off so I randomly walk around the city trying to figure out where the hotel is. I debate if I should eat and then decide I better get to where I’m going first and eat afterwards. I ask this other bus driver and he’s like: It’s about an hour away from here. WHAT? Yes, you should’ve asked. I did. You should’ve asked again. Well, I didn’t know where I was going so it was difficult to realize when I had to inquire. All right. He tells me to get on the bus 125, get off at Amayo and then catch 119. Oki, what choice do I have. I get the chicken bus. Forget the air con or even a seat. I am standing in the back; it’s dusty and hot. There’s a whole in the bus. 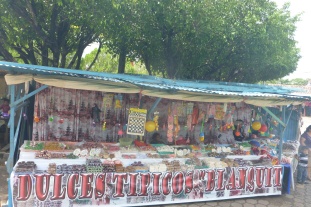 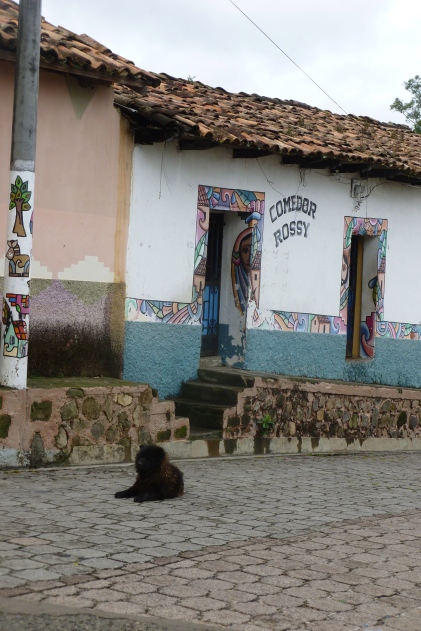 I have no clue where Amayo is, but figure it’s not too far. That was not counting the traffic and the road repairs. The lady beside me keeps staring at me. Guess, she’s never seen a backpacker. I don’t know how, but locals always know I’m not from there even if I speak the language fluently. I get a call from my cousin letting me know its 41oC. Well, sweating as I am, I have no difficulties believing it. I tell her, it’s probably 50oC on the bus, as we are not moving due to the road repairs! Now, the lady is really looking at me; she overheard me speaking a foreign language; i’m almost tempted to ask her if I can help her with something. I still manage to daydream when the bus comes to a full stop; I fall over the guy in front of me. He tells me not too worry, I can lean on him. He isn’t bad looking. What’s wrong with me? He looks like he’s 26. This time, I ask many times where is Amayo. Was suppose to take 20 min, right, took at least double that. I lost track. I inquire about bus 119 and I am told the bus stop is right there. I see a lot of coconut with flies buzzing around so I decide what the heck, I’ll buy one; I haven’t had one yet. Figured, I’ve been sick for the last 10 days, what’s a coconut with flies going to do? 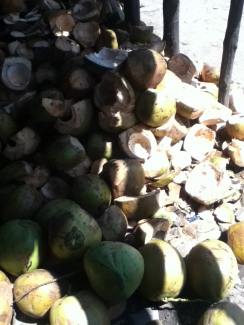 Bus arrives and it’s in between a chicken bus and a direct bus. No air con, but in better condition and less packed. I always hand in $1, the cobrador tells me it cost $1.35. Really? How far is it? Got use to paying 0.70$. It’s way past La Palmas. No idea where that is, but he wasn’t kidding, it’s far. I am getting restless. When I asked my cousin, she had told me it wouldn’t take more than an hour and a half. Hum, it took over four hours!

So the resort looks beautiful amidst the mountains. My $40 per night bedroom is just ok; it has the basics commodity including a TV. Customer service on the other hand is bad. I used to be a hotel receptionist so I know what I’m talking about. I’m quickly bored, however, the whole point of going there was to think about my future plans. It’s rainy season so past 5pm there isn’t much to do; it’s usually raining. I can’t go hike the tallest mountain in El Salvador by myself, so I decide to cut short my stay and leave a day earlier. I inquire at reception what time is the direct bus to El Salvador, she tells me 7am. It’s 9h! I catch a bus ride to Las Palma, closest village. I need a stamp for my postcard. Lady tells me it’s $0.45 and she takes out 5 big stamps. I’m like: « it’s for a postcard! I tell her: I’ll those stamps are going to take the whole postcard. Thank God, it’s only one postcard; I don’t have much time before the bus to the capital. I managed to buy some flowers for my aunt and hop on the chicken bus. No air con, but I got a front seat where I have space for my backpack and flowers. 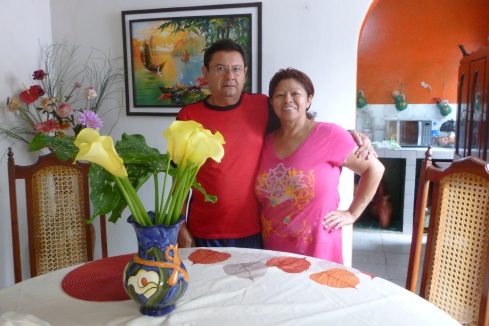 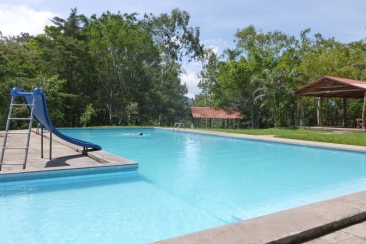 It’s 89 km, but I know this is going to take a while. I sit back and relax, enjoying the beautiful landscape. The mountains are very green from all the rain. This was the first time I went to El Salvador in June. I manage to grab the seat next to the window. A lady is sitting next to me; she suddenly grabs my leg. I look at her, not realizing we’re in a curve and well, she’s holding on to dear life. Feels like we’re in a race. She tells me, she needs to hold on to my leg so she doesn’t fall. I guess, it’s ok, not much I can do anyways. We don’t have the same distance policy as in Canada. I can only imagine if I grabbed someone’s leg in the bus in Montreal, what his or her reaction would be. Let’s get something straight; she kept her hand for at least a good 45 minutes, it wasn’t like a few seconds. Later on, I smell smoke. I’m wondering what that can be as their isn’t any other car on the road. I look outside and behind and realize it’s our bus; it’s burning! Bus driver decides to stop and with a bucket full of water as the motor is overheating and he needs to find a way to cool it. I’m not reassured and wondering if I’ll make it safely to San Salvador.I am laughing though thinking only in El Salvador or Central America for that matter, these things happen. Seems it worked as a few minutes later, we’re back on the road. A new lady sits down next to me. She starts talking to me and I then realize she’s trying to sell me make-up. I’m like, I don’t wear make-up and I definitively don’t feel like buying it on a bus. I smile and nod. She realizes she won’t get to sell anything to me. She gets off.

Throughout the whole bus ride, you have people coming in and out; there is no official bus stop. If you need to get on the bus, you just flag the driver. You can be a few meters from the next person; it doesn’t matter. It will stop twice. I never understood that. Takes ages. You also have people selling all kind of different things. At one point, I see a clown come in. This is a first; I’d have never seen a clown in the bus. I’ve seen people selling food, drinks, candies, pens, pills, creams, etc., but never a clown. I ignore him; he’s behind me anyways. Stays there for a while, entertaining people. I must admit; it’s better than the blind guy preaching Jesus or the other guy giving us Bible lecture for an hour. I always wondered how they managed to make any money? Some people come in and try to sells us Werther’s original candies, not the bag, but just like 1 or 2 candies. How is that profitable? How many do you have to sell a day to make a living? We once had this kind selling this miraculous face cream. Five people bought it for a dollar each. Really? As my friend and me are laughing, his neighbor believes this cream will cure her and buys one. Finally, after a three long entertaining bus ride for 89 km, I arrived to San Salvador where I take a taxi back to my cousin. This sets me back $5, but I can hack getting another two chicken buses. That’s the story of  public transportation in El Salvador. I love it; I feel it’s the only way to travel and to do like the locals. I know most of my cousin’s wouldn’t be caught dead in the chicken buses. They always find it strange that us backpacker aren’t bother by that kind of traveling. It’s all part of the adventure, I find.