It’s Sunday morning, as I am coming out of the metro to meet a friend, I see all these random people dress up in all sort of costumes. I’m wondering what’s going on when my friend says; it’s the Manga festival: Otakuthon Montréal 2013. http://www.otakuthon.com. Right, didn’t know that existed, but then again, am not surprised as they are so many festivals, it’s quite difficult to keep up. A friend of mine had asked me if I wanted to see Shaggy this weekend, as it was the Reggae festival. Last Wednesday, I went to the Olympic Park to see a free concert from the Symphonic Orchestra of Montreal. It was an intimate affair; I was with 30,000 other people crowded to listen to Kent Nagano and his orchestra. It was magical! From European classic to traditional Québécois music and beautiful last touch with Let it be.

So I was saying, after the brunch in Chinatown, my friend and I go out of the restaurant. It’s a gorgeous clear blue sky, the street is blocked and lots of people line up. It’s Gay Pride Parade today. I decide to stay and enjoy the beautiful day. I’m quietly sitting down; my friend has gone to meet another friend. A Chinese tourist asks me: what is going on? Why is the street blocked? It’s gay pride. What is that? Homosexual. It takes a few seconds and his mind comprehends what I just said. He replies Ooh, I’ve seen that already. I just nod and smile. Moments later, a French woman and her boyfriend are wondering what is going on. I tell them: c’est la Parade Gay. She replies: Ah la Gay Pride, OUI, la PARADE GAY. I also tell them, it’s not Québec city, but la Ville de Québec. Why do French people insist on saying English words is beyond me. I know perfectly well, that we do this in Québec. However, our context is different, we live in North America. We’re bilingual, often trilingual and we don’t pronounce English words with a French accent. End of story! 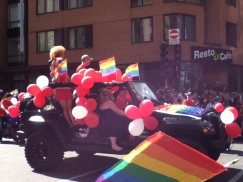 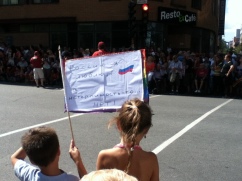 I was saying: I fell in love again this summer… with Montréal. It’s hard to pin point what exactly has made me gaga about my city. I guess a mix of things: spending time with foreigners and being back home after 8 months abroad. Any Montrealer will tell you, it’s a vibrant and creative city and home to two major languages spoken on a daily basis. Just this afternoon while I as waiting for the parade, I heard a father speaking to his 7 and 5 years old kids in Russian. He didn’t look Russian so I just asked him where he was from? He said, I am Canadian, but I lived in Russia for many years. I want my children to speak Russian. They spoke French and English as well. Now two things about this situation; First of all, it’s an incredible gift to give to one’s children, secondly, I spoke to him for a while. I know I am overly friendly. However, Montreal is also considered to be relaxed. That’s what our French counterpart keeps telling me. People actually talk to each other, or smile at you, and are very helpful. Particularly in summer asany excuse is good to be out and about. In winter, we are like bears and we hibernate; we stay underground, although we do have Igloofest. Tourists seem to love our underground city. It seems it’s one of the biggest in the world. What does it consists? 32 km of interconnected tunnels that include shopping malls, restaurants, metro, apartment buildings, bank, museum, universities etc. Why do people think it’s a big deal? Who knows? http://en.wikipedia.org/wiki/Underground_City,_Montreal.

Yesterday, I went out with couchsurfer’s. I took them to a traditional sing along bar in Old Montreal. The place was on fire. People in Montreal are known to be rowdy. Band’s often start their World Tour here. The Bulgarian girl asked me is it always like this in Montreal? Like what? Well, all these people outside, it’s so festive. Yes, it’s summer; we have harsh long winter when summer comes along, our Latin origin come out full blast. We like to have fun. Montreal is known to be party place. You can read more about in this website: http://www.craveonline.com/lifestyle/articles/165363-montreal-canadas-las-vegas-playground.

All summer, I had tourists/friends telling me how wonderful my city is. And then realization hit me. I do live in a great place. Sometimes, we are too busy complaining; we don’t realize our luck to live in such a fantastic place. I will always remember my Australian friend telling me all the reasons why Montreal was such a great place. She was right, forget the pothole and the corruption for a minute. We live in a city where we accept diversity and are tolerant of other cultures. Where else can you see Hassidic Jews on a Bixi? Where we have great restaurants, lots of festivals, home to best Bagel and Smoke Meat, Maple Syrup and yes, HOCKEY. Our city is a mixture of Europe and North America; where Franglais is spoken. Things are not perfect, but we make an effort to create a cool environment. And most importantly, we are not bothered by your status, where you live in the city nor what university you got your education.

I often get asks why I stay in Montreal when obviously, I’ll be thinking of leaving again soon. I love Montreal. I always come back; it’s a love affair between us. There is no other place in the world where I have such a good standard of living; where I can live alone in the center of the island and it’s still AFFORDABLE! I actually organized a BBQ with the other tenants, this coming Wednesday. I’ll let you know how it went. I love fall, winter, summer and spring in that order. Each season brings a whole new share of activities. My desire to temporarily leave Montreal is not because I don’t enjoy here, but more to do with my yearning to explore new destinations and horizons. Every return makes me fall in love with my city over and over again.

I love you Montreal! 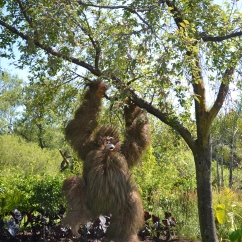